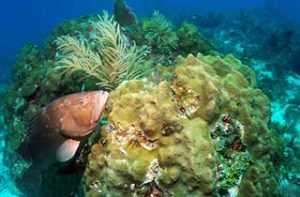 Supporters of the Tortugas Ecological Reserve hoped that by protecting a 151 square mile area of the Florida Keys National Marine Sanctuary from fishing that depleted marine life would rebound. A dozen years later, a new federal study has shown that that indeed has happened. The Tortugas Ecological Reserve was created in 2001, by commercial and recreational fishermen, divers, scientists, conservationists, citizens and resource managers who came together to set aside this large area of healthy coral reef habitat to ensure protection of biodiversity and fisheries. The reserve was designed to protect the coral reef, as well as important spawning ground for groupers and snappers, and essential feeding and breeding habitats for seabirds.

A new scientific study designed to examine how the reserve affected both the marine life of the region and the people whose livelihoods depend on them found that overfished species such as black and red grouper, and yellowtail and mutton snapper increased in presence, abundance and size inside the reserve and throughout the entire region; spawning aggregations of commercially valuable species, which were wiped out, began to reform inside the reserve; and catches for both recreational anglers and commercial fishing boats have remained steady. Overall, anglers did not experience any net financial losses in the short-term and rather unexpectedly, commercial catches of reef fish in the region actually increased and continue to do so. Tortugas fishermen appeared to adapt to the new reserve by shifting effort towards fishing grounds closer to their home ports.

“This research shows that marine reserves and economically viable fishing industries can coexist,” said Sean Morton, Florida Keys National Marine Sanctuary superintendent. “The health of our economy is tied to the health of our oceans. They are not mutually exclusive.”