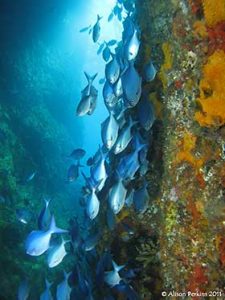 Beneath the waves at the Poor Knights Islands, an ocean of diving has been compressed into a relatively small area. Originally established in 1981 and closed to commercial fishing, this ancient volcanic pinnacle was also closed to recreational fishing in 1998, making it the 2nd fully no-take reserve in New Zealand. Sitting 12 nautical miles off of the North Island of New Zealand, this cluster of reefs and pinnacles lies at an intersection between temperate and subtropical waters, resulting in an exotic blend of over 150 marine species including coral shrimps and whale sharks. The abundance of rare marine life combined with the unique underwater architecture has made the Poor Knights Islands Marine Reserve one of the world’s premier dive locations.

Once all fishing was banned within the reserve, snappers, which are both commercially and recreationally important, recovered rapidly. Inside the reserve, overall snapper biomass increased by 818% and large snappers were over 7 times more abundant compared to when some fishing was still allowed. As with many other targeted species, large fish are critical to recovery of populations, as large snappers are capable of producing many more eggs than smaller fish. Scientists found that fecundity, or the output of eggs, was considerably higher (11-18 times higher) inside the reserve. This is good news for fishers, since the reserve could serve as a source of eggs and/or larvae for areas both within and outside the reserve.
These results suggest that partial fishing regulations may be ineffective for protecting targeted species since a rapid recovery of snapper ensued once all fishing was eliminated from the reserve.