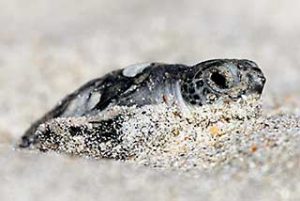 A new study has shown that green turtles appear to benefit in heading to a marine protected area over unprotected parts of the ocean. The study provides compelling evidence that making key swaths of the ocean off-limits for fishing and other ecological disruptions is proving a successful strategy for protecting marine animals, including the endangered green sea turtle. Sea turtles face many threats, including loss of nesting sites due to development, drowning in gill nets, being caught accidentally as by-catch, ocean pollution and plastic debris.

According to a new US Geological Survey (USGS) study, nesting green sea turtles are benefiting from marine protected areas by feeding in productive areas found within their boundaries. This study is the first to track the federally protected turtles in the Dry Tortugas National Park. Until now, it was not clear whether the turtles made use of existing marine protected areas.

Researchers tracked nesting turtles with satellite tags and analyzed their movement patterns after they left the nesting beaches. “Our goal was to better understand what types of habitats they used at sea and whether they were in fact putting these designated areas to use. They found that 35% of the turtles chose marine protected areas for foraging, more than would happen by random chance. This study not only shows managers that these designated protected areas are already being used by turtles, but provides insight into the types of habitats they use most,” said the study’s lead author, Kristen Hart, a research ecologist at USGS.

This study raises enormous speculation as to whether or not a larger quantity of the marine protected areas should be designated as “no-take” areas. More of these highly protected areas in the tropic and sub-tropic waters could create an even more extensive area for the green turtle and other species to forage and thrive in the protected waters, ultimately allowing the population of these endangered species to make a great come back. Richard Benyon, the Minister of British Fisheries noted, “This study unlocks some of the secrets surrounding the life cycle of marine turtles, whose movements have long been a mystery. The results will mean we will better manage the oceans and protect turtle habitats, which are key to helping them survive.”