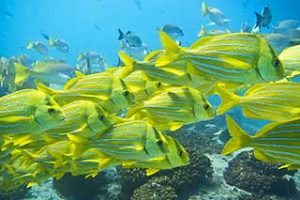 The Cabo Pulmo National Marine Park (CPNP), near the southern end of Baja California in the Sea of Cortez, is a shining example of how marine ecosystems can have a surprising and astonishing ability to bounce back – when given the chance.

This marine park was established in 1995 by local citizens to restore depleted coral reef fishes and other marine life that had been depleted due to fishing. The successful recovery of marine life seen here today can largely be attributed to the persistent support and efforts of its citizens whom have enforced the “no-take” restrictions.

Scientists from Scripps Institute of Oceanography in San Diego recently released a study demonstrating that the coral reef ecosystem at Cabo Pulmo National Marine Park is uniquely healthy compared to other marine protected areas in the Gulf of California. In fact, they call it the “most robust marine preserve in the world.”

Results of the 10-year study at CPNP revealed that the total amount of fish (biomass) in the reserve boomed more than 460 percent from 1999 to 2009. In addition, the biomass of top predators, a key indicator of coral reef health, also increased 11 times over the same time period, while the biomass of carnivores increased four times. The most striking result of the paper, the authors say, is that fish communities at a depleted site can recover up to a level comparable to remote, pristine sites that have never been fished by humans.

An additional unforeseen benefit of the marine life recovery at Cabo Pulmo has been an economic boost to the local communities through the creation of numerous eco-tourism businesses, including SCUBA diving and kayaking.