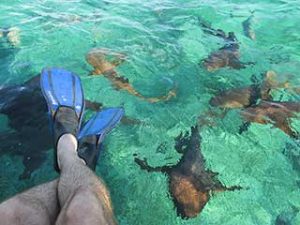 Uncontrolled fishing and coastal development threatened to decimate Hol Chan’s coral reefs, but in 1987 the Hol Chan Marine Reserve was established and now serves as an international success story for marine protected areas. Overfishing had removed most of the large predatory fish from the reef and also depleted conch and lobster populations. The community, concerned with the high level of uncontrolled, often destructive fishing and diving activities in the area, created the Hol Chan Marine Reserve, which has now been fully protected for more than 20 years. Hol Chan is considered one of the biodiversity hotspots of the Atlantic and provides protection to over 220 marine species including a variety of encrusting corals, such as brain coral, boulder corals and Staghorn coral that provide important habitat to thousands of invertebrates, fish, sharks and other creatures.

The reserve is divided into four distinct zones including vital mangrove and sea grass bed habitats, as well as coral reefs and an area where species of sharks and rays congregate known as Shark Ray Alley. This unique combination of habitats, diversity of marine life, and the excitement of swimming with large numbers of nurse sharks and stingrays has made Hol Chan Marine Reserve the most popular diving and snorkeling site in all of Belize.
Although small, Hol Chan contains an extraordinarily high biomass of fishes per unit area of reef including enormous schools of grunts and snappers and huge black groupers and grey snappers. The reserve also contains seven more species of commercial fishes than areas subject to fishing. Particularly important to the replenishment of the fisheries is the presence of large fishes within the reserve because of their disproportionately large contribution to egg production. In addition to boosting reproductive output, the large fish in the reserve may also play an important role in protection of species, which are vulnerable to fishing.

Locals themselves overwhelmingly believe that the high level of protection given to Hol Chan is the key to their enhanced welfare. Indeed, the most common complaint is that the reserve should be more protected from tourists, in particular those in the care of non-local guides from cruise ships. This case study shows that marine protected areas can and do work for a number of different purposes.